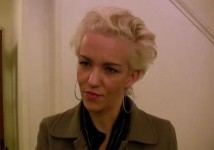 BoingBoing, the popular and influential blog about culture and technology, has had video for sometime and now it's bigger than ever, literally.

With the redesign of BoingBoing TV, featuring a larger video player and numerous thumbnails, the site has become increasingly "video-centric," said Xeni Jardin, co-editor, in my interview with her on Saturday.

Boy, she's not kidding! The player occupies the whole browser page.  At 640 X 360, it's the most prominent video player we've seen on a blog or news site.

BoingPoint ranks number four in influence on Technorati and had two million unique visitors last month, according to Compete.

I caught up with Xeni in New York at NYU where she was a speaker at the Open Video Conference. BoingBoing is based in Los Angeles.

This interview has some great stuff about the redesign, monetizing online video, and the power of video as a story telling tool.

Below is a very cool video Xeni made about video gaming on board a WiFi-enabled Virgin America flight.

Xeni Jardin:  A couple of years ago we launched BoingBoing's video project as kind of an outgrowth of the blog. And we were still thinking of video as something that you embed in a blog post and something that a text conversation happens around. And a couple of years into that we're really thinking about how best to present video content in a, I don't know, a video-centric way! It sounds gimmicky, but video is not a blog. So we have…there's like a big player right in the middle of the screen, right at the top of the screen; that's the focal point, and everything else around that is a visually driven search interface. So we produce somewhere between three and five episodes a week and some of those, I would say a good forty percent of what we produce is original and entirely produced in-house with me or one of the other BoingBoing guys hosting and it's something cut ourselves from start to finish.

Another chunk of the content that we put out might be animations or music videos that we acquire from creators who are kinda thinking along the same lines as we are in terms of just common cultural ground and using Creative Commons License. And then some portion of what we do also, particularily with the international material involves putting cameras in the hands of people who are not typically storytellers and working with them to help tell their stories in a way that feels honest and authentic.

Andy Plesser:  Tell us, sort of, the business model around video for BoingBoing.

Xeni Jardin: Um, we figured it out well enough to still be on the air, I'll just say that. I mean, I don't think anybody really has a magic formula down. Every month or so a new sponsor comes around and sometimes sponsors will pay us to sponsor a certain period of time. So like for a month Dell, Intel, or Verizon will sponsor everything we output. And sometimes a sponsor comes along and says, "We will sponsor every animation piece that you release" or, "We…If you do a piece of tech news each week, we want to underwrite that." And there are different ways that we display that branding. We can do branded or skinned players so there's a little logo that shows up in the flash embed. We do pre-roll and in-roll ads in the video, you know, and other stuff–a little text mention in the blog, or, I forget what the technical term is for this, but these like little pop-ups that happen…

Xeni Jardin: Oh boy. Um, it's a richer emotional experience in some ways. There…it is less of the voice of the reporter is involved. I mean, at it's best I think, there's more of the world and the story itself just kind of right there, coming at you. And then there is me, as a reporter, kind of telling you what I have seen or what I am experiencing or why this matters. I mean, even if you just think about the way that the files are constructed, a text file versus a photograph versus a five minutes worth of video, which is the largest file size, which carries the most data? Video is the richest of all the media that we have available right now.