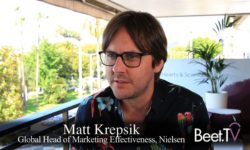 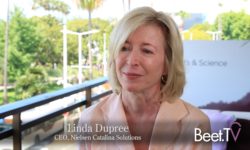 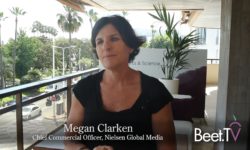 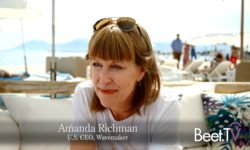 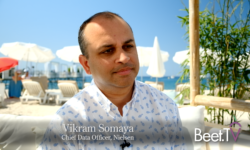 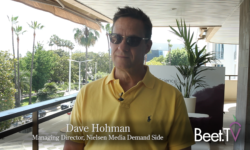 So says the recently-appointed global MD of Nielsen Media.

Matt O’Grady just relocated to London after a decade with the company in New York.

Nielsen recently acquired Sorenson Media, the early video encoding pioneer which had since moved in to enabling household-level addressable TV ad targeting but which had since filed for bankruptcy.

And O’Grady says Nielsen wants to bring Advanced Video Advertising to the UK.

“It’s starting in the U.S.,” he says in this video interview with Beet.TV. “But, I have to say, Sorensen first started in the U.K., and then they went over the pond. So my intention is bring them back over the pond, because the broadcasters in the U.K. are keenly interested and were, because Sorensen had a big position in the U.K..

Compared with the large but fragmented and often disjointed US media market in which O’Grady operated throughout his career, media markets like the UK are relatively more straightforward.

Often, there are fewer partners to deal with, fewer links in the chain. O’Grady says smaller media markets are more nimble.

“I’m really surprised at how quickly you can move in some of these smaller markets and how different some of the broadcasters operate in different markets,” he says.

“In many of these other markets, they already have OTT platforms that work very well. Netflix and Amazon Prime are obviously there, but (broadcasters) were monetizing their own content with over the top prior to a subscription video on demand coming in.

“A market that’s smaller and a market that’s evolved often does things that are very innovative, that take longer in a big market like New York.”

This video is part of the Beet.TV series “Creativity & Data Meet at Cannes” presented by Nielsen. For more segments from the series, please visit this page. You can find all Beet.TV coverage of Cannes right here.