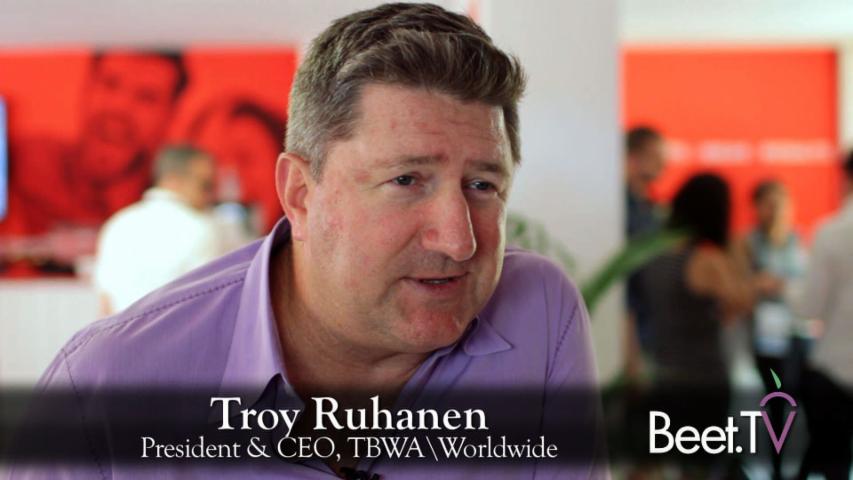 CANNES – Many people in the advertising industry are quick to bemoan high levels of turnover among younger employees. But not the president and CEO of TBWA\Worldwide. Given the rapid pace of consumer behavior and the ongoing melding of creativity and technology, Troy Ruhanen advises agencies to get used to filling open positions.

“You have to get much more comfortable with turnover. People see turnover as an evil and I don’t agree with that,” Ruhanen says in an interview with marketing executive Jordan Bitterman for Beet.TV. “We’re not afraid of having 30% turnover because we need to bring new skills in all the time.”

Ruhanen believes that the toughest job in the industry right now is human resources. So TBWA has taken a different approach to finding, attracting and keeping talent by introducing brevity to performance reviews and being flexible with its payroll.

“Most agencies are really crap at giving evaluations, partly because they’re too cumbersome,” he says. “We have a one-line evaluation form, that’s it. We say, ‘what is the impact that are you having on our business today?’ It’s very impact- based.”

Being more flexible with staffing budgets—not committing them all at once—provides the ability to respond to new needs and opportunities, according to Ruhanen.

“While you may have a certain number in creative, we don’t spend it all at once now like we used to,” he says. “Like giving my 10-year-old a hundred dollars. It’s a bad idea, so don’t do it. Keep it fluid.”

Agency HR departments cannot be truly effective if they just keep poaching their competitors, something that has been consistent since the advent of the industry. They need to know where to look for talent, and it doesn’t always come from predictable sources: Ruhanen cites Wall Street (analytics chops), journalists (highly insightful but underpaid) and design firms, among others.

“We are a much more informed, culturally sensitive agency than anyone else out there right now,” Ruhanen says.