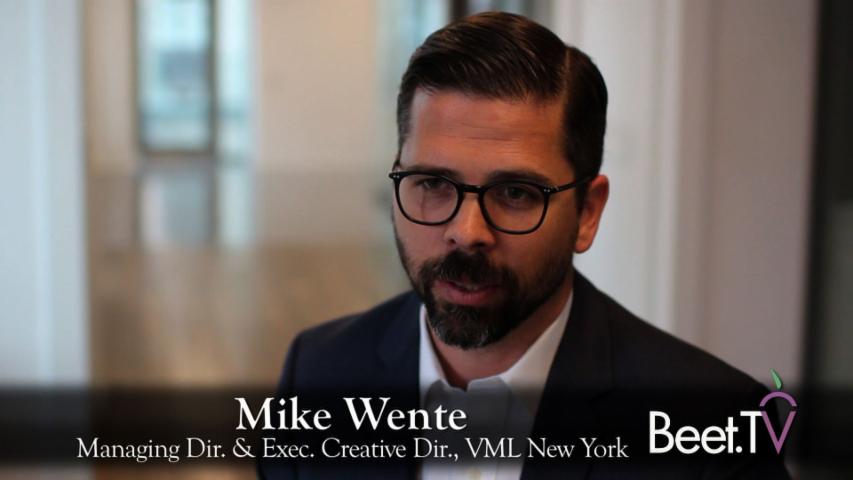 Advertising is changing faster, perhaps, than it ever has. Today, new platforms offer a new creative palette for agencies to make messages – and new challenges present limitations on their scope.

Underneath all that change, however, lays the kernel of the same, enduring construct – storytelling.

That’s according to an agency creative who has devised campaigns for the likes of Dell, Chevron and Motorola whose work for Virgin, Xerox, Adidas, LG, and ESPN has garnered industry awards.

“In some cases, having a narrative in a piece of film is still critical – whether it’s in Facebook or even something you’re doing in Snapchat,” according to VML executive creative director and managing partner Mike Wente. “But there’s certain kinds of executions that will be more successful within different platforms.”

Kansas City-based VML is another part of the giant WPP group, since 2001.

Many an ad-tech vendor these days attempts to offset their typical focus on technology, revenue and efficiency by pointing to the importance of “creative” and “storytelling”. Creative agency folk like Wente are the people at the sharp end of those disciplines.

The key skill of a creative these days is not just about constructing a story, but deploying it across a plethora of platforms, each with different norms and possibilities.

“Having another 15 seconds to be able to work within (on Instagram), how do you have a creative idea that lives within that?,” Wente says. “Is it more about using the title screen to show all videos, or larger story? It’s still about a story, but the way it manifests is much different.”

An example of using platforms’ unique properties is VML’s 21in1 campaign for Motorola, advertising its Moto X handset by using Motorola’s Instagram account profile page as a tiled canvas for multiple photos that, viewed as a whole, add up to a single image at the same time as revealing individual but supporting stories inside.

“It was a non-linear story that I could engage, interact and learn however I wanted to,” Wente says. “It still all made sense.”