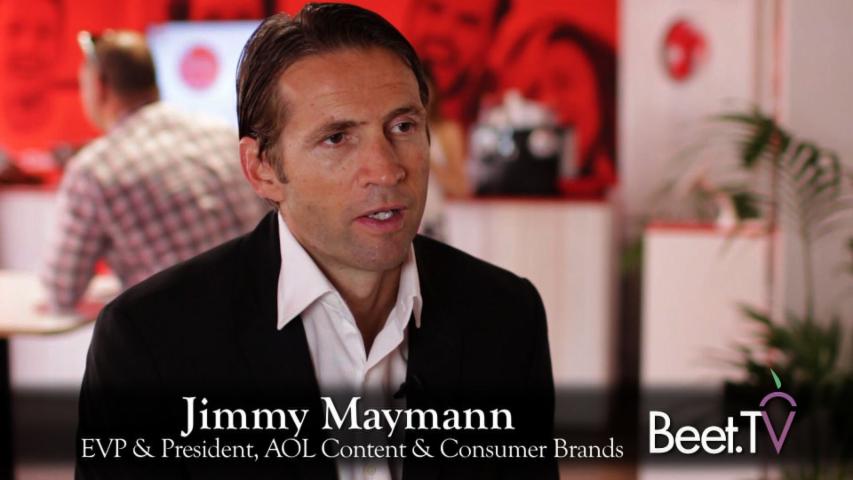 CANNES — If consumers are revolting against advertising because ad-tech has been too aggressive, why would anyone trust ad-tech to clean up the mess?

That seems to be the rationale at AOL, whose content division is now taking a stronger role in making ad formats that don’t piss off its readers and viewers.

“People are pushing back – we’re taking that very seriously on the AOL side,” AOL content and consumer brands EVP and president Jimmy Maymann reveals in this video interview with Beet.TV.

“We’ve actually created a whole new team and moved it over to my side of the house.

“Before, we worked on ad experiences more on the tech platform side of the house. But, at the end of the day, we need to have it closer to the content experience, the consumer experience, so that we create things that are more in line with the overall experiences we create.”

In June, AOL announced a reorg in which Tim Mahlman, the founder of AOL acquisition Vidible became president of AOL Platforms, a new role responsible for advertising technology and data products, built by 1,400 engineers, product developers and sales and client service leads. Maymann’s new team was not detailed at the time.

Maymann’s content division publishes The Huffington Post, Makers, TechCrunch, Engadget, Moviefone, AutoBlog, AOL.com, and MapQuest. His new team sounds like an acknowledgement that ad-tech has become too disconnected from the content that consumers want.

After a frenetic few years in which the industry has debuted programmatic sales, mobile formats, video ads, advanced, data-driven trading practices and more, both publishers and ad buyers are staring in to the abyss.

So far, it has been a summer when the reality has hit – according to multiple data points, consumer ad blocking is rife, and publishers are beginning to accept that audiences hate some digital ad practices so much, they want to opt out entirely.

How they respond will be fascinating. Maymann says already-introduced formats like in-steam ads, native ads and branded content have already begun to help give better consumer experiences. “But we need to push it even further,” he says.

“AOL used to really push the boundaries – three or four years ago, AOL produced the Devil unit, which ended up becoming an IAB thing. We want to get back to that mojo.

“We need to take that baton again and lead again. The industry needs to do more in that space.”