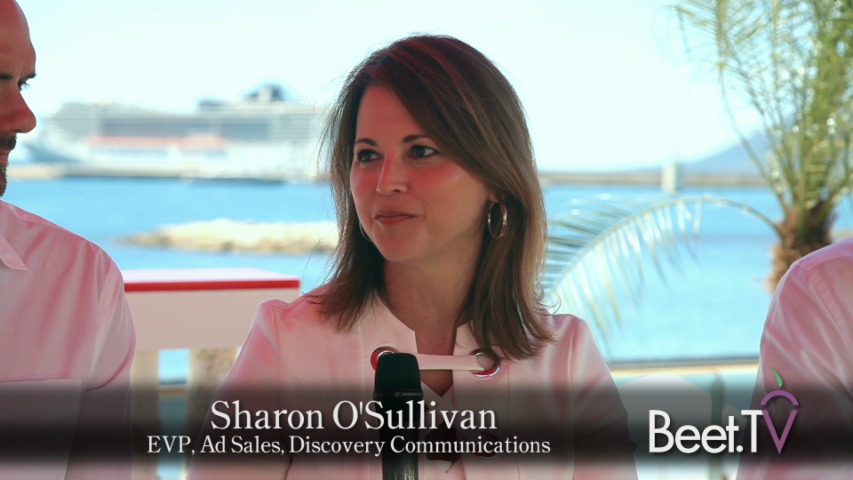 CANNES – How many choices television and video content distributors should give viewers in return for fewer or no advertisements—and the various forms those choices can take—drew mixed opinions among a panel of buyers and sellers. If the session hosted by Omnicom’s OMD agency network elicited agreement on one thing, it is that consumers have been “abused” by too much advertising.

How to alleviate that abuse prompted a range of responses from Sharon O’Sullivan, who is EVP of Ad Sales for Discovery Communications, Joe Marchese, President of Advanced Advertising at Fox Networks Group and Ben Winkler, OMD’s Chief Investment Officer. In response to a question from moderator Matt Spiegel, SVP and GM for Marketing & Technology Solutions at MediaLink, Winkler declared that “the future is here, but it’s not evenly distributed” before questioning the concept of consumer interaction with ads.

“I’m not sure that I entirely buy the idea that people want to be active participants in their advertising experience,” Winkler said. And although the average American watches roughly five hours of TV daily, “They’re not doing that because they like to make choices. They’re doing that because they like to be entertained. And they want that to be as easy an experience as possible.”

Winkler warily cited a “dystopian” future in which every time he tries to watch something he will be asked, “are you interested in seeing a home improvement ad, or perhaps a soft drink ad?”

Marchese also voiced skepticism. “I’m actually not as bullish on choice of what ad to see,” he said. “I don’t understand why it became such a taboo idea to admit that we’re buying peoples’ time. It’s called media buying for a reason. You’re paying to be put in front of somebody. I think consumer choice on that level isn’t there.” He went on to note that people will interact more with ads if it leads to reducing total content interruption. “Invariably we’ve seen it,” Marchese said.

The closely related issue of how media companies make revenue adjustments to offset lower commercial loads brought home the reality that some old media buying metrics need to fit into new circumstances. O’Sullivan lamented the fact that while Discovery has gone to great lengths to limit its commercial loads, “We haven’t gotten credit for it. When you’re in that negotiation and you’re talking CPM’s, no one’s ever said, ‘You know what? There is more value in that reduced commercial load.’”

By way of cause and effect, media sellers piled on more ad inventory. “And now it’s gotten to a point where it’s consumer abuse,” O’Sullivan said. “It shows up in ratings. Then it comes back to the economics. What are you giving up in rating for that over commercialization? And that’s why you now see some media companies cutting back.”

This video was produced at the OMD Oasis at Cannes Lions 2016 as part of the Future of TV Advertising Leadership Forum, a series presented by true[X] and hosted by OMD Worldwide. true[X] is wholly-owned unit of FOX. Please visit this page for additional segments.

By Steve Ellwanger on June 28, 2016 @steveellwanger
Tweets by Beet_TV