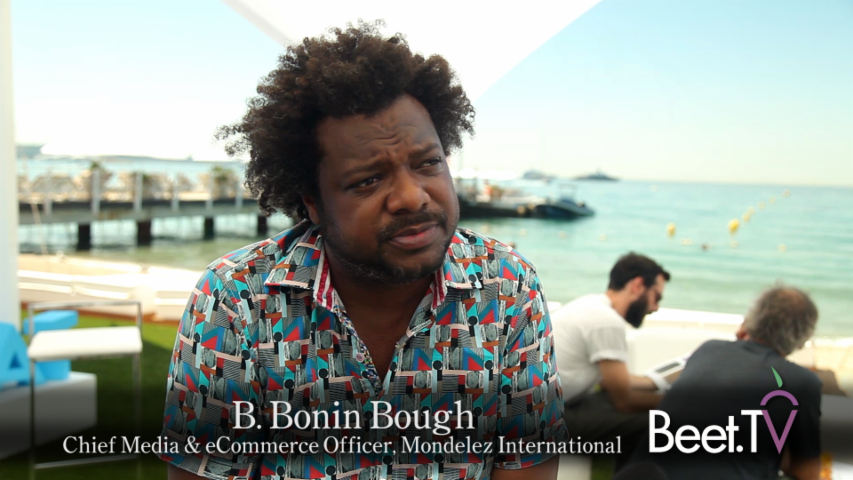 CANNES – There’s been lots of meaningful talk about the creative uses of data at the Cannes Lions gathering. But the media executive who represents Oreos and other venerable consumer staples says the “absent conversation” should have been about reaching consumers via digital messaging apps and platforms.

To B. Bonin Bough, Chief Media & Commerce Officer of Mondelez International, there’s a general belief that says second to mobile devices, consumers are either staring at videos or their Facebook feed.

“But the reality is that it sits inside of messaging,” Bough says in an interview with Beet.TV “Here we have, as a creative community, no conversation around what does the world of creativity look like when you can only send the consumer a message or when you have to communicate with them in one of those platforms.”

From a targeting standpoint, he adds, “Also, by the way, it’s closer to first-party data than any other platform we have. For me, it’s the absent conversation here at Cannes this year.”

Bonin ranks understanding the messaging ecosystem ahead of such talked-about topics as ad blocking.

“The ad blocking conversation is important because it I think it affects our investment, but I actually think it’s a very small portion of the conversation to be perfectly honest with you,” Bough says. “We’ve had ad blocking for years. It’s called ‘I’m just walking away from the TV screen.’”

Mondelez has been an early pioneer in testing and deploying addressable television ads. Bough calls it “super important” and a growing component of the media mix, then quickly returns to the world of messaging.

When it comes to all things mobile, Bough has taken matters into his own hands, so to speak, by authoring the book TXT ME and putting his phone number on the cover. (Subtitle: Your Phone Has Changed Your Life. Let’s Talk About It.)

While at Cannes, he says, “Today we’ve talked with over twelve hundred people.”

We interviewed him last week in Cannes where he was a participant in session on advanced TV hosted by Carat. Segments from that session will be forthcoming.

Beet.TV interviewed Bough as part of our series on addressable and the new world of television advertising. This series on Beet.TV is sponsored by AT&T AdWorks.