Anderson Cooper: People Should Consider The Sources Of Their News Feeds 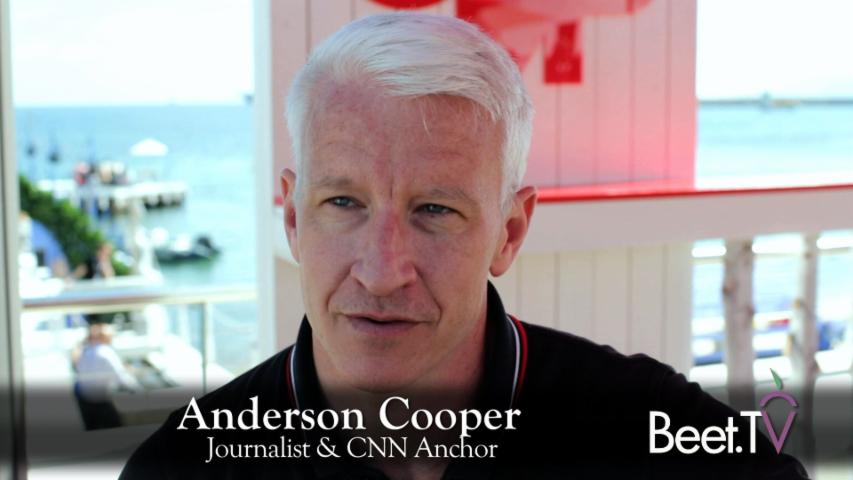 CANNES – CNN anchor Anderson Cooper, who likes to tell “other peoples’ stories”—sans teleprompter—has some advice for a generation that has access to lots of information: take the time to learn where it’s coming from.

Whether it’s the ongoing news story about the mass shootings in Orlando or the 2010 earthquake in Haiti, Cooper wants to be where things are happening, as they happen.

“I like being on the scene on the front limes. I like the teleprompter being blank or not having a teleprompter at all,” Cooper says in an interview with Beet.TV.

Asked about the press coverage of his own coverage of Orlando, Cooper is reflective about his importance. “I don’t think in those terms,” he says. “I’m there to tell other peoples’ stories. As much as possible I don’t want to be part of the story.”

To Cooper, authenticity and veracity should be foremost in importance to viewers of anything that passes for news content.

“This generation has access to more information than any generation in the history of the world and it’s an extraordinary thing, an amazing thing,” Cooper says.

But that overabundance comes with caveats.

This video was produced at the OMD Oasis at Cannes Lions 2016 as part of the Future of TV Advertising Leadership Forum, a series presented by true[X] and hosted by OMD. Please visit this page for additional segments from the series.