To Change The World, You Need A World View: TBWA’s Garbutt 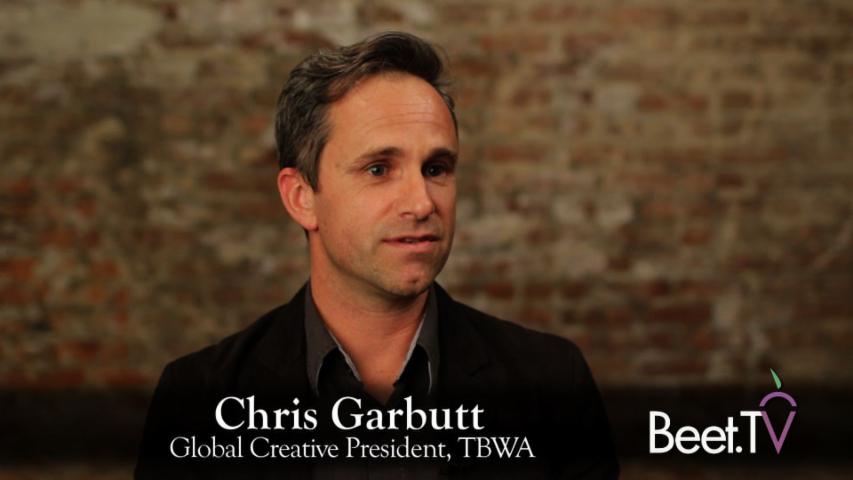 He started out as a graduate graphic designer in South Africa – but, today, Chris Garbutt thinks the skills required to effectively portray a brand in the world go far beyond the visual.

The global creative president of the big TBWA media agency says: “Brands need to ladder up to having a point of view in the world or some kind of big noble purpose, they need to have a belief.”

That’s something TBWA is uncovering for its clients, with messages like Airbnb’s (“a world with no strangers“) and Gatorade’s (“win from within“) providing the fulcrum around which many executions can grow.

“If you know what your brand purpose is, then you can work out story arcs or narratives of brands over time,” Garbutt adds. “It’s the worst mistake to just develop content without any objective in mind or an understanding of who you’re talking with.”

Garbutt returned to TBWA from Ogilvy in 2015, overseeing accounts including Nissan, McDonald’s, Adidas and Pernod Ricard, as part of a drive to create a “less traditional model” of advertising. He says he wants to the company to be nimble and open-minded.

“It helps to understand, through social listening, what are the emotionally-charged triggers out there, what’s the calendar of the year that’s important to intervene in,” he tells Beet.TV. “If you can show up at the right times to the right audience with the right kind of story …it’s so much more meaningful to people.”

That means adding skills from people with backgrounds in editorial, storytelling and journalism to agencies, Garbutt adds – people who can help “execute at the speed of culture” and “make a dent in the universe”.