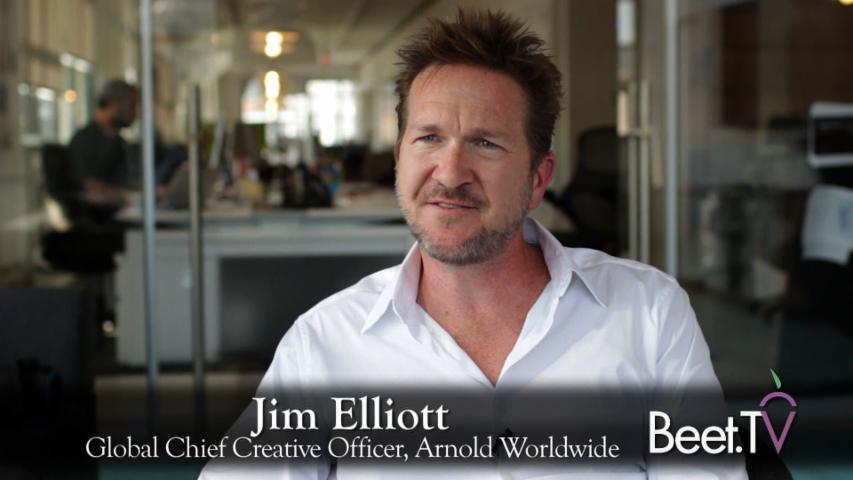 Sure, ad agencies can try and sell stuff to consumers – but they can also change the whole world.

That’s according to one agency creative chief watching a world of change open up new opportunities – for brands that are prepared to communicate honestly.

“Never before has advertising been such a part of culture,” Arnold global chief creative officer Jim Elliott tells Beet.TV. “The lines between entertainment and advertising is blurring more and more. We’re driving culture. We’re inspiring culture.

“We have so many opportunities, channels, platforms, places that we can interact with audiences – it’s never-ending … to create art that drives business, motivates people and changes the world. Never before has advertising been in a position to effect change … it’s incredible.”

Elliott took the role at Arnold in 2015, working on clients including Hershey, New Balance and Jack Daniel’s, after a stint at Y&R. His campaign work has garnered a list of awards as long as your arm – Cannes, D&AD, CLIO, London International, New York Festivals, Stephen E. Kelly, Effie Worldwide, the One Show, the Epica Awards, National ADDY, the Art Directors Club, the ANDYs, Communication Arts, the Webbys, Radio Mercury, the Web Marketing Association and the Yahoo! Big Idea Chair.

So what, for Elliott, is the driving imperative of modern brand work? “It has to feel authentic to the brand,” he says. “It needs to feel the brand has a permission and a right to put this idea out in to the world. It can’t be force-fit.”

That means being “authentic” and “transparent”, he adds. “It’s not blindly selling someone and not wanting to hear what your audience has to say or think.”