Digitization Of TV ‘Not For The Faint Of Heart”: FTI’s Hanlon 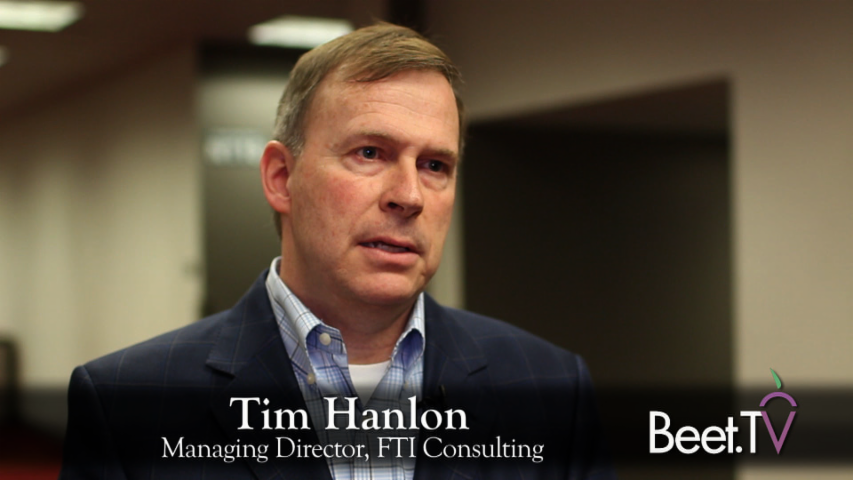 LAS VEGAS – While witnessing the digitization of television is “not for the faint of heart,” near-term agreement on multiple viewer measurement currencies is a step in the right direction for the digital and TV camps, says consultant Tim Hanlon.

Hanlon, who is Managing Director of FTI Consulting, brings to the playing field decades of journalism (CBS) and major advertising and media agencies like Starcom MediaVest Group. He likens consumers’ desire for more flexibility in how they are able to consume video content to when the government unplugged AT&T with a consent decree in the 1980’s.

“I think the FCC is just recognizing that the cable industry, the network operator industry broadly, has had a chokehold on that distribution point,” Hanlon says of cable boxes. “When the telephone used to come from AT&T you had three flavors and it came from AT&T corporate.”

The consent decree gave people a larger choice of phones to access the AT&T network. “The inevitability is that consumers want choice, but the cable industry has been pretty adamant about sort of locking that experience up,” Hanlon says.

Hanlon’s “not for the faint of heart” characterization of the digitation of TV derives from his knowledge of both sides of the fence.

He believes the middle ground consists of the digital and TV sectors agreeing on viewer measurement commonality that speaks to the brand and reach aspects of television as well as the granularity of targeting of digital audiences. He is also a proponent of having more than one ratings currency.

“I believe a lot of marketers, advertisers and agencies are starting to mix their own sort of proprietary blends of what they want out of media,” Hanlon says. “It’s high time that the programmers meet them in the middle and start to collaborate on how those data sources can co-mingle and maybe create alternate currencies to what the value of the advertising might look like.”

Beet.TV interviewed Hanlon as part of our series on the need for standards around premium video advertising. The series was produced around the NAB Digital Summit in Las Vegas. This series on Beet.TV is sponsored by the NAB.

By Steve Ellwanger on May 3, 2016 @steveellwanger
Tweets by Beet_TV