Upfronts Should Be More Than A Once Yearly Ritual, Dentsu Aegis’ Mike Law 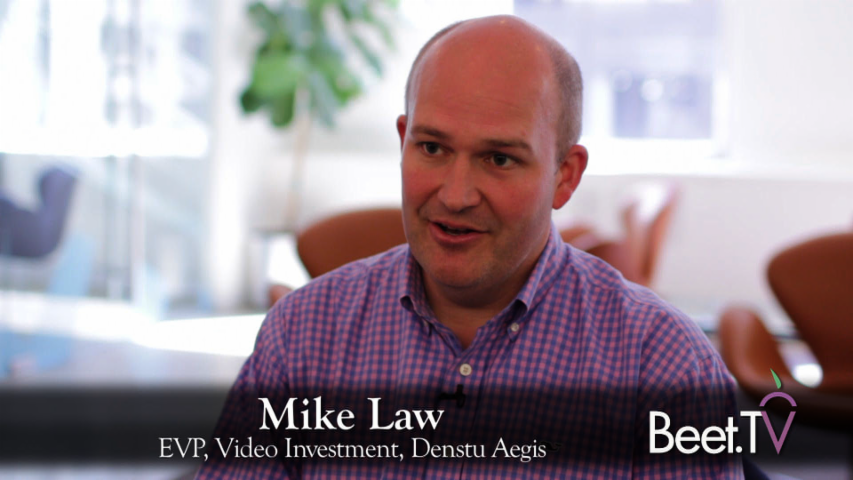 Dentsu Aegis Network sees the annual television Upfront rituals as less a once-yearly negotiating stint with media sellers than an ongoing conversation about how to unlock more consumer targeting data and find the proper balance between TV and digital video.

Like other media buyers, the company still “lays a base” with TV buys during the Upfronts, according to EVP, Video Investment Mike Law, but the bigger picture is more important.

“The upfront is very much about supply and demand, but it’s not a two week cycle and we’re done,” Law says in an interview with Beet.TV. “How do we set some framework and ground rules around how we’re going to grow” things like addressable TV advertising.

Law echoes the sentiments of other buy side executives when expressing optimism about the growth of addressable TV, citing the expansion and/or emergence of targeted ad solutions from the biggest cable providers. “By the end of this year you could see upwards of 50 million homes that have full addressable access,” Law observes.

Likewise, “close to a dozen” data providers have come on the scene to supplement what used to be one or two companies helping to inform the targeting of addressable TV ads.

“The combination of audience scale plus scale of data has made addressable a much broader offering to more industries,” Law says, noting that Dentsu Aegis Network has used addressable ads for General Motors.

Addressable ads are typically targeted to “most likely very active consumers, people who are more intent to make the purchase,” Law says. What’s particularly attractive is the ability to overlay a 30-second commercial, one with a slightly different creative message than other households are served, with a call to action, as in “If you need more information, click here,” says Law.

The desire to achieve the proper budget allocation between digital video and TV is causing “a lot of churn” in the marketplace, with dollars going back and forth between mediums as marketers continue to experiment, according to Law. The other component is figuring out what kinds of creative work best on which viewing platforms.

“I think we’re spending as much time thinking about what’s the balance between TV and digital video and once you’re in that digital video space, what’s the right creative message and how do we do that better,” Law says.

Beet.TV interviewed Law as part of our series on addressable and the new world of television advertising. This series on Beet.TV is sponsored by AT&T AdWorks.