‘Beyond Critical Mass’ On The Horizon For Addressable TV: Cadreon’s Matt Bayer 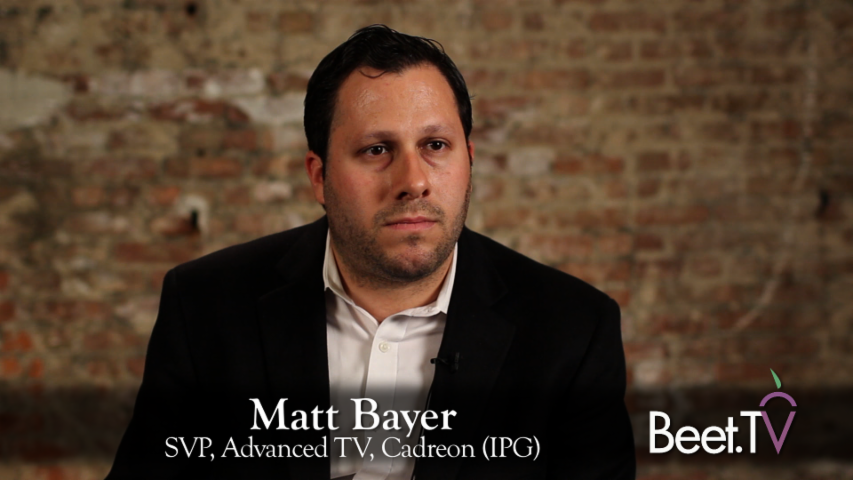 If the acquisition of Time Warner Cable by Charter Communications becomes reality, the resulting entity’s customer base—when added to that of Cablevision, DirecTV and DISH Network—will represent “beyond critical mass” for addressable television advertising, according to a top programmatic ad executive.

Until then, supply and demand realities surrounding addressable ad inventory will impact its continued adoption and use, says Matt Bayer, SVP of Advanced TV at Cadreon, the programmatic technology unit of IPG Mediabrands.

“There’s no question that the addressable TV marketplace should be higher than what it is. It has a lot of room to grow,” Bayer says in an interview with Beet.TV “Over the next few years, the supply and demand curves will be a little difficult to endure for an advertiser.”

FORTUNE reports that a majority of the five-member U.S. Federal Communications Commission has voted to approve the Time Warner/Charter deal, which also includes Bright House Networks.

Combined with existing cable and satellite TV providers, “When you take all of that together that’s beyond critical mass,” Bayer says. “That in some ways will help clients to rethink the role of TV in the context of their media plan. You’re looking at numbers of 60 million 70 million plus and it’s really exciting.”

To Bayer, advanced TV—whether addressable at the household level or buying audiences based on data showing when and where key customers will be watching—is more than just lowering costs of traditional media buys based on age, sex and demographics. It’s about delivering specific business outcomes.

He calls the merger of metrics providers comScore and Rentrak, completed earlier this year, a huge testament to the need for one unified metric across all screens.

Beet.TV interviewed Bayer as part of our series on addressable and the new world of television advertising. This series on Beet.TV is sponsored by AT&T AdWorks.