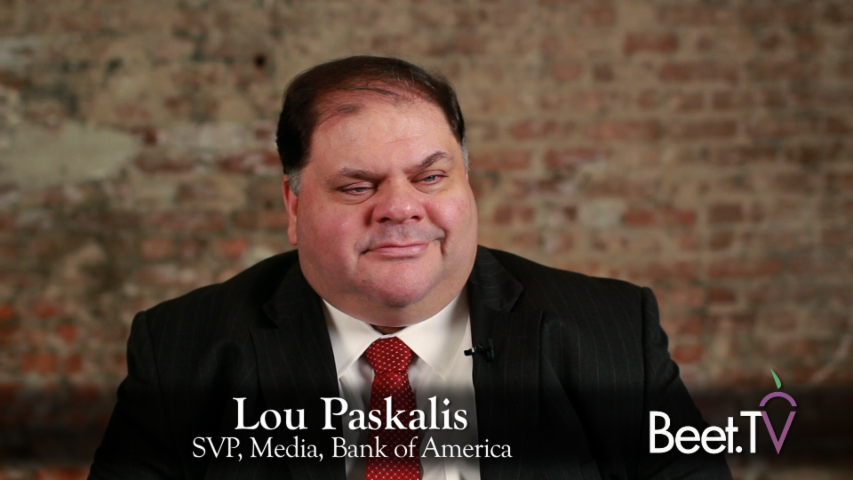 Having successfully tested addressable television advertising for its MerrillEdge investment platform, like other marketers Bank of America longs for greater scale and more variability in being able to serve the most appropriate creative messaging.

One challenge for BOA—which offers nine core products—is that the current footprint of addressable TV households is small. MerrillEdge is one example.

“We were only able to find about 25% of the households in our target through addressability,” Lou Paskalis, SVP of Enterprise Media at BOA, says in an interview with Beet.TV. Nonetheless, “We had really great success with that.”

He believes that increased scale will happen shortly, at which point pricing will come to the fore.

“The question is will marketers be willing to pay a premium per household versus a CPM buy when you buy the entire footprint,” Paskalis says. “I think we need to be ready to do that so that the vendors are willing to make the investments necessary to give us the ability to target every household in America differently on TV.”

Another challenge is getting permission to use first-party customer data for marketing purposes, something that is shared by data vendors. “I think the vendors who understand it’s truly a partnership and it’s an opportunity to create better are going to succeed, and I think the ones that fail are the ones operating with a walled garden mindset,” Paskalis says.

Along with the ability to target specific households based on their characteristics comes the need for ever more iterations of creative messaging. “We will need more creative variability than the industry has today in order to take advantage of the signal sets that we have,” Paskalis says. “Traditional methods won’t get us there. Technology has to play a part in that solution.”

Paskalis’ wish list includes TV providers to be able to get “even more granular about what kind of data they can provide on the households they service,” plus things like frequency caps against households—also in a more granular way.

“We want to make sure that while we’re targeting the right household and doing it in a way that adds value and creates a better experience,” Paskalis says. “I think right now most vendors are still figuring out the plumbing.”

Beet.TV interviewed Paskalis as part of our series on addressable and the new world of television advertising. This series on Beet.TV is sponsored by AT&T AdWorks.