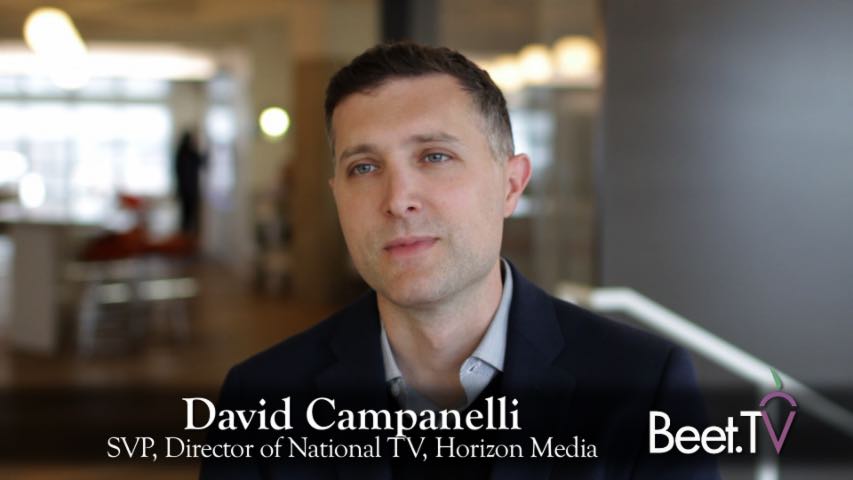 “I don’t think the digital versus linear discussion is even valid anymore because there’s plenty of ways to deliver live TV through digital means,” David Campanelli, SVP and Director of National TV for Horizon Media, says in an interview with Beet.TV.

With the value of traditional TV advertising being large-scale brand building over time, addressable provides the ability to precisely target households at the right time. “Addressable is an incredibly valuable and powerful complement to traditional TV advertising,” enabling brands to focus “on the just the people you want to reach after you’ve done the work of the larger brand building,” Campanelli says.

He sees the real distinction that technology is bringing to TV as that of live viewing versus on-demand viewing.

“I think we’re seeing an absolute merging of linear and digital into unified platforms,” Campanelli says, citing Hulu, with 70% of its total views coming to the TV screen. “That’s no longer really an online video entity anymore. It’s a TV entity, because the overwhelming majority of their impressions are coming from the TV.”

Although the concept of the Upfront TV negotiating season will change over time, the practice of committing TV budgets in advance will not, Campanelli says. The near-term challenge is how live and on-demand viewing gets measured and correlated so that buyers can get to a true total audience measurement across platforms.

“Once we get there, we get the full scope of what a network or show is delivering,” Campanelli says. “That allows us to change our view of how we’re buying things and equalizes the playing field between digital and linear.”

Beet.TV interviewed Campanelli as part of our series on addressable and the new world of television advertising. This series on Beet.TV is sponsored by AT&T AdWorks.