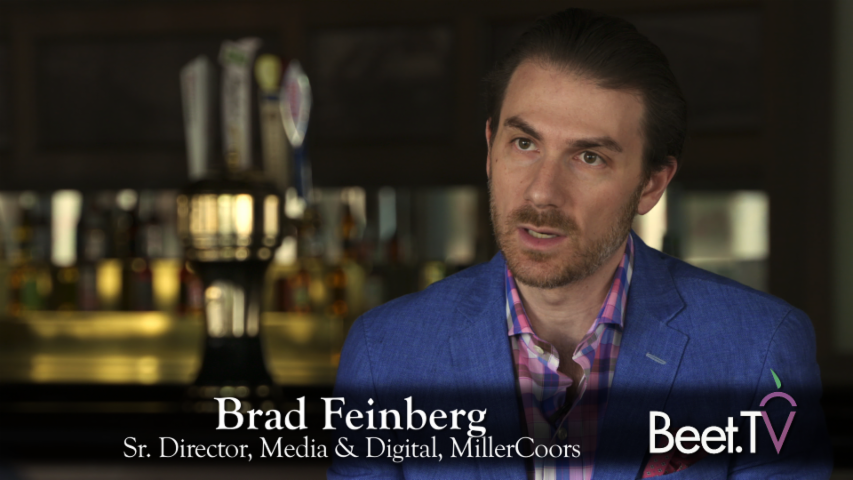 CHICAGO – Being able to target ads to television households based on their cultures and languages could be a boon to MillerCoors, but only if there’s a direct linkage to sales from addressable advertising and the costs of customizing creative messages is not prohibitive.

The beer marketer is considering the best strategic approach to addressable advertising, most likely as a complement to its broad-reach media buys, much of which are on sports programming, Brad Feinberg, Senior Director of Media & Digital, tells Beet.TV in an interview at the company’s corporate headquarters.

“We’re having conversations with our agency now to try to identify those key sweet spots where we would first go in,” Feinberg says.

Key to its decision-making is being able to link sales gains to investments in addressable TV ads. “For us it’s looking at store data and key geographies in key markets,” Feinberg says. If data from Nielsen Catalina Solutions and other sources can show a sales lift in households that were shown a particular addressable ad, “That’s where I think the sky’s the limit as it relates to addressable,” Feinberg adds.

One obvious target for customized beer ads from MillerCoors is bilingual males and females ages 21-34 who are second- or third-generation Hispanic immigrants. “If we have the opportunity to hone in on that core segment and understand their behaviors and use addressable targeting, we can create customize messages, whether in English or Spanish, to reach that particular audience,” Feinberg says.

A big concern about addressable TV, shared by Feinberg and other marketers, is the cost of customizing messages for various audience targets.

“The challenge for brand marketers is how much are you going to invest in production costs for some of these smaller audiences and does that cost to create something custom outweigh running in mass, scalable media,” Feinberg says.

Beet.TV interviewed Feinberg as part of our series on addressable and the new world of television advertising. This series on Beet.TV is sponsored by AT&T AdWorks.

By Steve Ellwanger on May 6, 2016 @steveellwanger