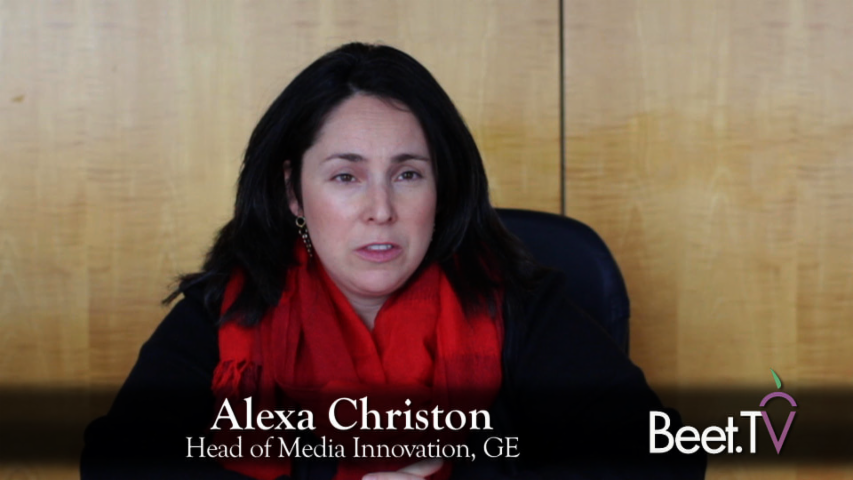 Having shifted away from television advertising buys based solely on gross ratings points, it is been a few years since General Electric made any buys during the annual Upfront negotiating season. “We’ve changed our strategy quite a bit in terms of taking packages kind of off the shelf,” Alexa Christon, Head of Media Innovation at GE, says in an interview with Beet.TV.

Although GE still likes to hear what programmers have to offer at the Upfront presentations, “We don’t buy on the GRP, we’re really buying on behavior,” Christon explains.

GE wants to figure out where its target audience is and “come across in a way that maybe is not obvious for GE and that allows us to disrupt and get an audience’s attention,” Christon says.

The company does not see itself as suited to buying addressable TV ads right now, but it acknowledges the benefits for categories like retail and consumer packaged-goods.

“I do think that addressable is really going to drive a different behavior on the marketing side,” Christon says. This includes looking at segmentation and buying behavior and driving behavior in meaningful ways.

“Being able see that both downstream for a marketer and all the way upstream, what’s the relationship from the brand all the way down to the point of sale” is GE’s desire, says Christon.

Beet.TV interviewed Christon as part of our series on addressable and the new world of television advertising. This series on Beet.TV is sponsored by AT&T AdWorks.