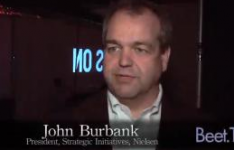 Today at the AOL Digital NewsFront event, AOL and Nielsen announced an overnight ratings system for digital video, which is more TV-like but is drawn from a vast audience of Web users, says John Burbank, President of Nielsen Strategic Initiatives, in this interview with Beet.TV

AOL is the first digital publisher to be part of the program which is being used by the U.S. networks, Burbank says. The new product was first reported by The Wall Street Journal.