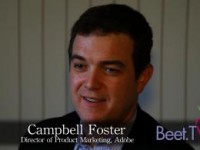 CANNES – Viewership of TV programming by cable subscribers on their digital devices is accelerating quickly , says Adobe’s Campbell Foster in this video interview with Beet.TV. We spoke with him at the MIP conference where Adobe was a presenter.

Even without the Olympics, the number of steams rose seven times year over year, and he says. This has created a considerable demand for an integrated industry solution for getting television programming into the hands of consumers using mobile devices.

Disclosure: Adobe is the sponsor of Beet.TV coverage of the MIP conference.