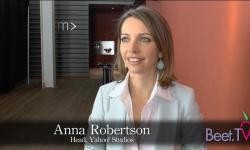 AUSTIN – Late last month, Yahoo launched its first live daily live show, a short, pre-opening bell show about the markets.  Earlier this week at SXSW, we spoke with Anna Robertson, head of the Yahoo Studios, about the new show and the overall the live programming strategy at Yahoo.

She explained that live is important but the decision to go live has to carefully considered.

Some of Yahoo! live programming of big news events are produced with its partner ABC News.  Today, the giant portal is streaming news of the election of the Pope.