The New York Times has Prototyped a Link-Centric Search Engine 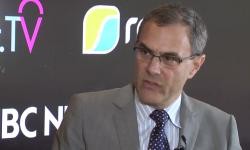 The New York Times R&D Labs has created a prototype search engine that provides Times article results with embedded links to sources outside of the paper, says Michael Zimbalist, VP for Research and Operations in this conversation with Forrester Principal Analyst Joanna O'Connell.

As an example, he says the search engine allows users to input the name of a college and then see Times articles containing alumnae of the college regardless of whether of or not the article mentions explicitly that the subject attended the college or University.

Zimbalist frames the initiative as part of the "linked data" movement, also known as the "semantic web," as a way to surface up content which had not been previously linked.

He explains this and the other implications of "big data" for the media industry in this segment from the Beet.TV Big Data Summit at NBC News presented by RAMP.