How Comic Andre Meadows Found His Groove with YouTube Assist 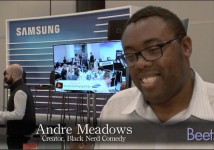 AUSTIN – “A lot of people have fun with YouTube,” explains Andre Meadows, creator of ‘Black Nerd Comedy‘, “but there’s also a business side to it.” In an interview with Beet.TV at SXSW, Meadows explains how his YouTube channel evolved from a hobby into a full time career.

Meadows says that he began his YouTube channel for fun. He started out with a video that was simply an audition tape for a television show and began posting music video parodies and sketches here and there. However, at the first VidCon online video convention he realized that people were actually making a living from creating YouTube videos and he decided to turn YouTube into a career.

In addition to regularly scheduled content, including shows ‘Black Nerd Rants‘ and ‘Awkward Talks With Girls‘, Meadows has honed his YouTube skills with the help of YouTube itself. The company offers a variety of programs for up-and-coming creators. Meadows was a part of YouTube’s Next Vlogger program—a hand-on program that gave video bloggers equipment and training, and is also currently enrolled in a class at the new YouTube Space in Los Angeles. In the video, Meadows talks more about these programs as well as his experience as a YouTube creator.