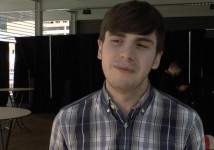 AUSTIN — Given the speed of the news cycle and the time needed video news production, social media is “the first way we break news now,” says Andrew Springer, Producer of Social Integration at ABC News, in this interview with Beet.TV at SXSW

He explained how ABC News is building a following of several million on Twitter – and how “organic” socialization of news content is buidling an audience for the iconic brand.

Springer was a panelist moderated by Anna Robertson, head of Yahoo! Studios.