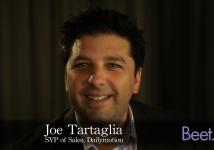 With the proliferation of second screen applications and social media, television networks have at their disposal more tools for innovation than ever. However, while networks are beginning to experiment with these tools they have been slow to adopt, says KIT Digital’s Global Lead Analyst, Alan Wolk in an interview at the Beet.TV executive retreat earlier this month.

Wolk says, “The TV industry is not hurting—it’s actually the opposite. It’s doing better than ever. People are watching more TV, the networks are making more money and so, when you have a situation like that, there’s really no incentive for them to innovate. Why fix something that’s not broken?”

Wolk compares the television industry of today to the cellphone industry before the iPhone. He explains that the TV industry is waiting for someone to do something really innovative. Once one industry player gets the ball rolling, competitors will have to jump on board.

That’s not to say that there aren’t a large number of companies and services working on innovative technologies. In the interview Wolk also discusses some of the innovation that’s going on with the second screen, saying that he believes that the main focus of second screen apps is going to be discovery. Second screen apps “are going to be program guides and remote controls first, with social functionality laid on top of that, and also a strong discovery engine.”