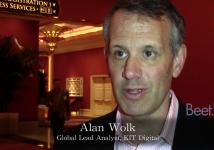 LAS VEGAS – In the past few years, the Consumer Electronics Show has become of increasing interest to the marketing and media world. Now, it rivals the ad industry’s leading show, the Cannes Lions, says Dominic Proctor, President of GroupM Global, the giant media agency of WPP.

We spoke with him outside the the CES show for his take on the show and the future of the media business.