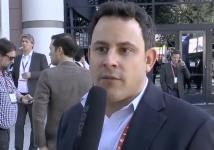 Given the industry attention to cord-cutting, the Intel-Comcast partnership announced at the Consumer Electronics Show to bring TV Everywhere programming to multiple devices is an important one to watch, says Michael Bologna, Director of Emerging Communications at GroupM, in this interview with Beet.TV at the conference held earlier this month.

“We have all been talking about cord cutting but this is the first thing we have seen that will enable consumers to watch live TV over-the-top without disrupting the advertising ecosystem,” he says, adding that at the show his goal was to check out new hardware that will impact the business of advertisers or marketers in the years ahead.

Another interesting development to note is the growth in connected TVs at CES. Now, about 60% of homes in the United States have them, with one-third using them, and actual client campaigns are now running live on these TVs, he adds.

Under the Comcast-Intel pair-up, Comcast will stream XFinity programming to Intel devices such as tablets, smartphones, or computers, the companies said.