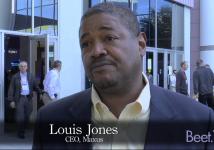 The proliferation of video distribution across multiple devices is an exciting development, but the mediaindustry needs to solve the issue of cross-platform buying, says Louis Jones, CEO of Maxus,North America, the media agency unit of WPP’s GroupM.

We spoke last week at CES after a tour of the show floor with GroupM chairman Irwin Gotlieb.

Adweek recently named Maxus the Media Agency of the Year.