“Generic Girl” Creators On Producing Content For An Online Audience 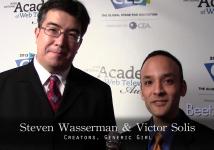 LAS VEGAS — Producing content for an online audience is an entirely different ballgame from producing content for a television or film audience, thanks to the open dialogue that exists on the web between creator and consumer.  At the IAWTV Awards at CES, we spoke with Steven Wasserman and Victor Solis, the creators of live action comic series Generic Girl, who provided some insight on directing and producing for the web.

Solis explained that one of the biggest issues when it comes to producing online content is duration, as online viewers are accustomed to short, bite-sized pieces of content.  He told us that, after putting out the first couple of episodes, the Generic Girl team got feedback from fans that the episodes felt a little long, "so we went back in post production, tightened it up and made our first two episodes much shorter."

Solis says, "It’s a connection between the fans and us, the creators, that has enabled us to do that.  If it was any other industry, we wouldn’t have that kind of connection."

Wasserman adds, "The big boys, whether they be studios or networks, pay lots of money to have focus groups.  But really you don’t need a focus group if you’re talking to your real fans, because they’re going to tell you what you’re doing right, and what you’re doing wrong."