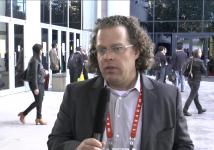 LAS VEGAS — Last year Felicia Day, who began her career as an actress and made her foray into the production side of things as the creator and writer of The Guild, launched her own premium YouTube channel, Geek & Sundry. After nearly a year of running the Geek & Sundry network, we caught up with Day at the IAWTV Awards at CES to find out what the experience of transitioning from acting to the business side of things has been like.

Day explains, “The journey from being an actor to being a creator, a producer, a business person has been very rocky, but ultimately amazingly rewarding.” She tells us that, with the Geek & Sundry initiative, “My goal was to make things that people enjoy,” and that’s exactly what she’s been doing.