AOL to Launch Brand Video Engine “Goviral” in the U.S. in January 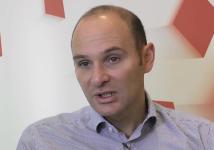 MONACO – AOL’s Goviral, the London-based, global company for the distribution of brand videos, will launch in the United States in January, says Rene Rechtman, CEO and founder, in this interview with Beet.TV

Goviral, acquired by AOL last year for $97 million, says it works with 40 top global brands and some 40,000 publishers in 80 markets.

Goviral works with brands in getting video views on both publisher sites and on social networks. It does not use pre-roll or in-stream advertising.

In this inteview, Rechtman explains how consumption of some media is moving away from the disruption of pre-rolls and banner ads.

We interviewed him at the Monaco Media Forum earlier this month.