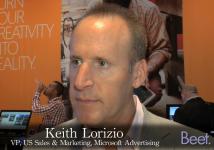 Later this month Microsoft will debut Window 8, an app-like interface which appears the same across the desktop, tablet, phone and Xbox.  The apps provide a big advertising opportunity for the company and its publishing partners, says Keith Lorizio, VP, U.S. Sales & Marketing, in this interview with Beet.TV

He explains that Microsoft and publishers share revenue sold by either party into the platform.   He says Microsoft is working closely with advertising agencies in creating unique advertising units.

Lorizio says that Microsoft is spending "millions" in helping publishers create apps for the platform and the company has targeted 100,000 apps to be live on Windows 8 within 90 days of the launch.  He says that the company expects some 400 million units of Windows 8 to be active by July, 2013.

Unlike Apple iOS and Android, Apps for Windows 8 are created in a consistent framework.

We spke with him at Advertising Week where he unveiled the advertising initiative around Windows 8.