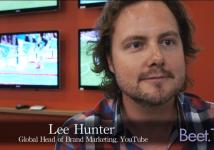 SAN BRUNO, CA — YouTube is streaming 3500 hours of 10 separate live channels of the London 2012 Olympics in the United States, via NBCOlympics.com, and to 64 countries in Sub-Saharan Africa and Asia, including Ghana, Kenya, India, Malaysia and Singapore.

The huge effort by the Google unit, which ingests the feeds from the International Olympic Committee and encodes them for global distribution, has not been created as a money-making effort, but as a "branding moment," says Lee Hunter, Global Head of Brand Marketing at YouTube in this video interview with Beet.TV

Hunter explains that the project to stream the Olympics is an extension of a long-established relationship with the IOC which began with the Beijing Games.

We spoke with him on Friday at YouTube headquarters as the Olympics was getting underway in London.

This is the first in a series of three segments with Hunter.

More about the technology elements of the project reported by Janko Roettgers at GigaOm.

For more over our coverage of the technology surrounding the global video streaming of the Olympics, please see all our coverge here.