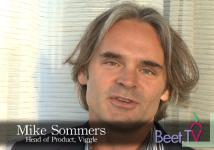 The app, which is available on Android, Apple iPhone, iPad and iPod touch, works by allowing viewers to accumalate points each time they check into a show, which they can redeem for a variety of prizes, including iTunes gift cards and Kindle Fires. The more points banked, the bigger the gift.

Partnering with networks and television companies, Viggle further incentivizes audiences to engage with linear content across mobile by giving away more points if the 'viewsers,' engage with content that directly links to the shows they are watching on TV, he says.

The app increases the 'social TV' experience for viewers, Sommers adds. We spoke with him at the Inaugural KIT digital Salon Dinner, in association with 2nd Screen Summit.