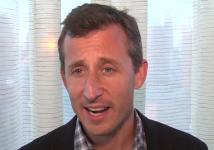 SportsYapper is a Twitter-like app for sports fans says co-founder Eric Goldstein, in this video interview with Beet.TV

As a free iphone app, fans can now "yapp" about great catches and calls in real time, with others watching the same game.

The product is aimed at sports enthusiasts who want to engage with others purely on the basis of sports topics, unlike Twitter, where users are tweeting about everything, he adds.

Following a similar format to Twitter, Goldstein says, "SportsYapper" will also be global, but instead of following the standard 140 character restraints of Twitter, the app will allow users to exchange in microblogs with a 300 character limit.

In this interview, he tells Beet.TV, how SportsYapper will make sports programs more interactive and social media friendly.

We caught up with him at the Inaugural KIT digital Salon Dinner, in association with 2nd Screen Summit.