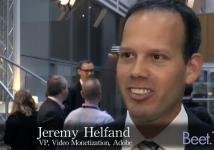 LONDON – Whilst consumers are watching increasing amounts of video across multiple digital devices, publishers and advertisers are faced with extraordinary challenges in serving content and advertising effectively.

Adobe's Jeremy Helfand says it has a technology platform to solve this problem for both on-demand video and live, linnear programming on digital devices.

Last month, the company announced its Simulcast offering.   In the interview, Helfand says that the company will announce its first big global broadcaster this summer.

These advertising services were part of Auditude which Adobe acquired last year.

We spoke with him last week in London at BBC Worldwide at the Beet.TV Global Video Summit.

Disclosure:  Adobe was a co-sponsor of the Beet.TV event.