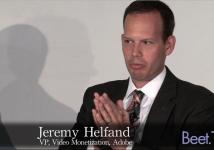 LONDON – Premium video publishers need to customize the number of ads per show, depending on the interest of the individual viewer and other factors, in a dynamic not a “static” ad delivery scenario, says Jeremy Helfand, VP for Video Monetization at Adobe, in this segment from the Beet.TV Global Video Summit at the BBC Worldwide.

In this segment, he notes that typical ad load (number of ads) on premium video is less than on its television counterpart.  This disparity is due in part to the widespread use just pre-roll and a lack of mid-roll ads in longer shows.   He says that mid-roll ads are often more effective.

Also in this segment he talks about the growth of “TV Everywhere” as a result of easier consumer authentication solutions.