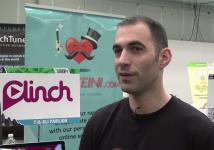 Video startup 'Clinch' will launch a new app that edits video footage and photos from multiple mobile devices to produce one full movie.

"It's powerful when you go to music concerts and sport events, where a lot of people are looking at the same thing but from different angles, says Oz Etzioni, CEO of Clinch, in this interview with Beet TV.

The app uses cloud computing technology and automatically runs geometric tests as well as face and object detection on the footage it receives. Each shot is then ranked according to quality and the app picks the best shots to produce the final film.

Movie makers can customize films by selecting a single clip, against which the bulk footage is calibrated. Changing this master clip will alter the mood and tone of the movie.

We spoke with Etzioni about the technology and applications of 'Clinch' at TechCrunch Disrupt.