Exploring the Future of Video Journalism with NBC News Digital Chief Vivian Schiller, others this Weekend at the #BeetRetreat 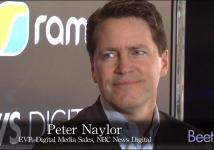 VIEQUES, PR – The future of video journalism will be one of the two principal tracks at the Beet.TV executive retreat tomorrow and Saturday at the W Retreat & Spa on Vieques, Puerto Rico.

Keynoting the program will be Vivian Schiller, Chief Digital Officer of NBC News, a former CEO of National Public Radio.   Schiller will kick off the event with a fireside chat with Jason Pontin, Editor-in-Chief of the MIT's Technology Review.

We will be producing a great deal of content from the event including both the sessions and one-on-one interviews with the participants.  Due to production and bandwidth issues, we will not be streaming conference live.  To keep up with the program, please follow us on Twitter @beet_tv and the event's hashtag is #beetretreat

Gracias to Our Sponsor Taboola!

Very pleased thata the Vieques conference is being sponsored by Taboola, the very cool New York/Tel Aviv-based company which drives video recommendatons for Bloomberg, CNN, Gannett, The New York Times, Reuters and Beet.TV.  Many thanks to CEO Adam Singolda and his team for their continuing support.