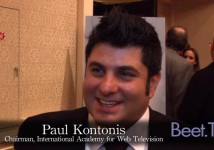 LAS VEGAS — The International Academy of Web Television, which held its first awards program on Thursday night at CES, will have partnerships with YouTube and Yahoo this year, says the organization's chairman Paul Kontonis in this interview with Beet.TV

We spoke with him after the ceremony on Thursday evening.

Kontonis said the partnerships with the giant video sites will involves educating and organizing a global community of Web video creators, along with content creation.   In an email message he explained:

"Educational events with YouTube to help creators best use their platform. Yahoo is committed to developing original web series programming and we will be supporting their efforts and helping bring the best ideas to life."

He also said that plans are underway for next year's awards.

Below is a photo of Kontonis with Yahoo's Erin McPherson, VP and head of video programming. Yahoo was one of the sponsors of the awards program.