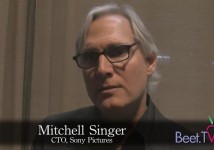 LAS VEGAS – The industry consortium of five of the the major Hollywood studios, the Digital Entertainment Content Ecosystem (DECE), is readying a common file format for digital content distribution, says Mitchell Singer, President of the group and Chief Technology Officer of Sony Pictures in this interview with Beet.TV

Singer calls it the first interoperable DRM system, allowing consumers to share digital films across multiple devices irrespective of the security solutions.   It will be released later this year, he tells Beet.TV

The work of DECE and progress with its product called UltraViolet was presented at a sesson at CES on Tuesday.

A panel composed of the participating studios and executives from Samsung and Amazon was moderated by CNET News.com reporter Greg Sandoval who filed this report.

Singer says in this inteview that in 2012, some 250 million DVD's and Blu-ray disc will be enabled with UltraViolet, allowing consumers to store their physical collection in the "cloud."

At the event, Amazon announced it would be joining the effort in a limited way.  Also, Samsung announced it would have an UltraViolet button on some new Blu-ray players to allow users to easily upload movies to their digital "lockers."