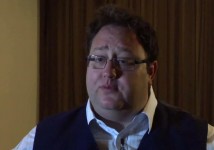 For an overview on the syndication strategy of AOL, we have excerpted this segment from a session on online video at the Monaco Media Forum which features Ran Harnevo, founder of 5Min and now SVP for Video at AOL. I moderated the session.

In this excerpt, he calls AOL the world's "largest curated Web video library."

Disclosure:  Beet.TV has a syndication agreement with AOL/5min.