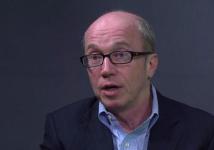 In an interview with Beet.TV, Murray explains how the iPad has enabled a growing audience to watch greater amounts of both short and long form video.

While on-demand video clips  have been  part of the Journal’s iPad App, this week the paper launched a video-specific App which plays both live and on demand content.

In addition to the new App, the Journal is making its video content available to range of IPTV devices.

Editorial Approach to Video:  “We are Leveraging our Journalism”

While the live programming has the look of a professional broadcast, much of the field reporting is generated by Journal print staffers with iPhone 4’s who report live via Skype, chat or upload clips from locations around the globe.

It is on the ground reporting and expertise of the staffers that makes the content unique. Murray says the paper is “leveraging our journalism.“