ScrollMotion: A Revolution in Motion Graphics, Defining a New Form of Video for Apps 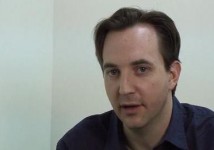 ScrollMotion, a 100-person, fast-growing New York City start-up, has developed an enterprise solution for publishers and companies to create unique, video-rich Apps for the Apple iOS and Android platforms.

Beet.TV sat down with co-founder Josh Koppel, who has an extensive background in motion graphics and video, to explain how his company is redefining the very notion of the moving image in digital media.

He explains how static images like photographs and instructional pages in textbooks become moving elements on the iPad and other devices. He also discusses the use of conventional video assets in Apps.

Some of the company's high profile customers include Hearst's Oprah and Esquire magazine, the Harry Potter Wizardry film App, Houghton Mifflin Harcourt and the 2010 GE annual report.  Several examples are included in this video.