PJ Crowley on The Arab Spring: How Social Media Ignited a Revolutionary Movement 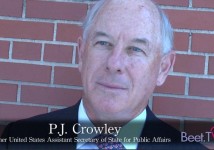 The Arab Spring is not a “Twitter revolution,” but  a real revolution in which social tools including Twitter, Facebook and YouTube played a central role in organizing movements, says PJ Crowley, former Assistant Secretary of State for Public Affairs, in this interview with Beet.TV

We spoke with him last week at the Digitas NewFront conference where he addressed social media and the developments in the Middle East in a panel with Egyptian filmmaker Amr Salama and Time magazine ME Richard Stengel.