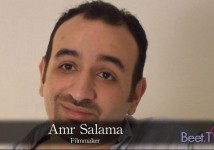 Amr Salama, an Egyptian filmmaker and a central figure in creating the alternative media universe during the revolution in Egypt, is finishing a documentary about the historic events.

Through an appeal on his Twitter account, he received 300 GB of camcorder and camera phone footage, he says in this interview with Beet.TV.

His film is one of a trilogy of documentaries about the revolution. He says the film has wrapped.

In the interview, he speaks about the use of Facebook as an organizing platform. He also describes how citizens shared videos with Arab broadcasters when the Internet was cut by authorities.

He gives a personal account o his arrest, brutal beating and his release.

He also speaks about the changes he predicts for the Egyptian film industry: more reality, lower budgets.

We spoke on Thursday at the Digitas NewFront event where he was a panelist, along with former State Department spokesperson PJ Crowley and Time managing editor Rick Stengel.

In a related project, citizen video of the Egyptian revolution is being assembled by a team leaded by Knight Fellow Jigar Mehta at Stanford.  In this video, Mehta explains the project which is titled "18 Days in Egypt." Mehta is former video journalist at The New York Times.