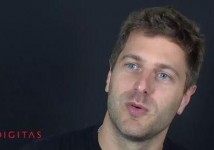 The iPad has "truly become the fourth screen," says Daniel Heaf, Digital Director of the BBC Worldwide, in this interview with Beet.TV.

He says that session time on the device matches the time spent with traditional media such as periodicals and television.

He says the BBC has had over 10 million Apps downloaded worldwide for the iPad and other devices. This includes Apps for travel guides, magazines, games and news.

While Apps are popular, making them of enduring value to consumers is a critical challenge, he states.

Disclosure: This video is published as part of series of thought-leadership interviews produced by Beet.TV in association with Digitas, in advance of the Digitas NEWFRONT11.