How the AP Vetted a Citizen Video of a Death in Cairo…..and the Arduous Task of Verifying UGC 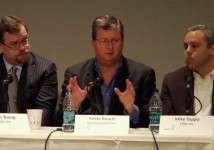 WASHINGTON — During the unrest in Egypt, CNN iReporters uploaded 1600 videos and photos,of which 44 were vetted for use on CNN.

While there is value having citizen reporting out on the streets, verifying the content can be an arduous task, according to panelists speaking in this 7:30 minute clip from the Beet.TV Video Journalism Summit at The Washington Post.

One of the most dramatic videos from Cairo was an AP video of a protester being shot. The raw, unedited clip has gotten about 670,000 views on YouTube.

The images were recorded by a citizen and confirmed by an AP reporter who was at the scene and saw the shooting, says the AP's Kevin Roach.  While this video was easily verified, most submitted content is not as simple. And, Roach adds that even trusted sources can cheat, like a reliable tornado chaser who was caught Photoshopping a tornado he didn't see.