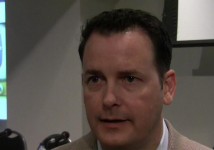 Part of the success around the network's growth has been by streaming programming on popular live portals with channels on Livestream and Ustream, in addition to the network's live player.

Live programming engages an audience in a significant way, explains Mark Larkin, VP for CBSNews.com.  He says growth has always come from the video centric redesign of the site, search optimization and the deployment of social media tools.

Larkin was a participant at the Beet.TV Video Journalism Summit at The Washington Post earlier this month.

CBS is also publishing a considerable amount video on its YouTube
By Andy Plesser on February 17, 2011 @beet_tv
Tweets by Beet_TV