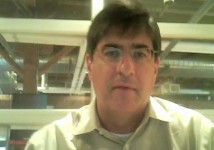 SAN FRANCISCO  – Metacafe, one of first and biggest online video destination, has been building various special interest areas including one for movie fans.

The week, the company launched a destination site about video games.  The new site is headed by gaming industry veteran Doug Perry.

For an overview on the new channel and progress at Metacafe, we spoke with CEO Erick Hachenburg via SkypeVideo.

Metacafe says it attracts over 12 million unique visitors per month in the United States.