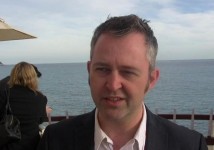 MONACO — Having watched several cycles in the European tech start-up scene, this is one of the most exciting times, says TechCrunch European Editor Mike Butcher in this video interview with Beet.TV

Today, the Wall Street Journal's Ben Rooney writes about the continent-wide excitement about innovation and the start-ups, he says that the "excitement is palpable" and everyone wants to love a "Eurogeek."

I conducted our interview, on a sunny day on the French Riviera, at the Monaco Media Forum where Mike was a moderator and covered for TechCrunch.

Mike likens the start-up scene to so many airplanes flying in the clouds for so long and now having visibility of each other.  While the scene is exciting, he says there are limitations in Europe.

Surely a good deal of this excitement will be on display tonight in London at The Europas Awards. Mike says the event, which he has organized, expects 350 attendees.  It is sold out.

And, much more Eurogeek love in Paris next month at Le Web.